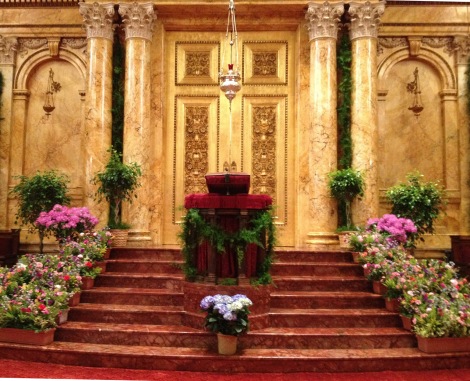 In anticipation of Shavuot I’ve been thinking about a well know Talmudic aggadah and I was surprised to find myself understanding it in a new way. I refer here to what is probably the most well known Talmudic tradition concerning the revelation at Sinai (bTalmud, Shabbat 88a). The teaching interprets the Torah’s description of the Revelation in a quite literal manner. The Torah states that the people of Israel stood at the foot of the mountain (Deuteronomy 4:11), but literally ‘in’ the foot of the mountain. The Talmud therefore expands on the biblical text to add context. It presents Har Sinai as a coercive agreement, wherein the Jewish people were given the ‘choice’ to either accept the Torah’s laws or to be buried underneath the mountain, which God had raised above them. It is a difficult portrayal to swallow, as it is an all too real scenario which Jews have found themselves in during the exile, forced to choose between living in a foreign faith or dying in an ancient one.

There is, however, an earlier version of this aggadah (Mehilta de Rabbi Ishmael) which presents this levitating mountain not as a threat but as a protective tent, held over the people during the lightning and thunder of the Revelation.  The mountain was the huppah to Israel’s marriage to G-d. Still, what are we to make of the coercive version widely known from the authoritative Babylonian Talmud? Here the experience of the Western Sephardim might help us to understand.

The second half of the aggadah is equally puzzling. On account of the coercive acceptance, the Talmud states that Jews actually had a case to make to be excused from their commitment to the Torah, as they had never accepted it of their own free will. However, the aggadah adds, that is no longer the case, as Jews freely reaffirmed their commitment to follow the Torah during the days of Esther.

The overall presentation of the aggadah is challenging, as the Torah itself makes the point that Jews said na’aseh v’nishma, that we will do and listen, implying a full-hearted acceptance of Torah, unmarked by coercive tactics. What then is the meaning of the midrash?

In our day and age many Jews (as well as Jewish descendants and Non-Jews) are choosing to be Jewish. The ba’al teshuba movement, though, is nothing new. From the 16th to 18th centuries tens of thousandsWestern Sephardim, forced to lived according to another faith in Portugal and Spain, embraced the opportunity to return to their heritage in places along the shores of Western Europe and the New World. Their rabbis produced texts for them in Spanish and Portuguese to teach them the meaning of the prayers, the obligations of the Torah, and the philosophy of Jewish faith. They established new Jewish communities across the globe, and taught us that no Jews is ever so far removed from their heritage that they cannot return to their roots.

Perhaps the midrash is actually an allegory for every Jew’s religious experience. In a sense, we are all coerced, in that we did not freely accept the Torah, but were rather ‘forced’ to do so on account of our birth. While true, the covenant at Sinai is eternal and binding, that does not mitigate our sense that we never agreed to it and yet we are compelled to follow its laws.

In a manner of speaking, we all find ourselves in the time of Esther, living in Exile, free to choose how to live our lives. It is therefore necessary that Jews in each generation rediscover their personal love of Judaism and reaffirm their commitment to Torah. While not doing so, doesn’t legally free us from our obligation, doing so does reaffirm, revitalise, and make meaningful our commitment to it.  In that sense, on Shavuot each Jew should see themselves as a new convert to Judaism at Mount Sinai, once again choosing to be Jewish. How will we decide?

4 responses to “Shavuot – Choosing to be Jewish”