It is a humbling experience to walk into the library of the Ets Haim yeshiba. Surrounded by sefarim, many from the 17th century, one can only imagine the Torah immersion that took place within its confines. I am reminded of the description of the yeshiba in the writing of Rabbi Shabbetai Bass, author of siftei hakhamim, who visited the community in the 1600s, and wrote about the he yeshiba’s impressive progression of studies and high level learning.

A portion of the sefarim are written in Spanish and Latin, a result of the important work done by the community’s rabbis to reeducate the returning conversos of their time. To get to the library you walk through a room containing the community’s insignia, the Phoenix, a testament to their rebirth. The Library is part of the complex that surrounds the Portuguese Esnoga.

I was shown around by the library’s librarian, who explained to me how the sefarim were found in crates by American soldiers following WWII, and returned to the Amsterdam community. Work is being done to compile an online catalog of all of the library’s holdings, as well as to digitize all of their manuscripts, many of which are unpublished. 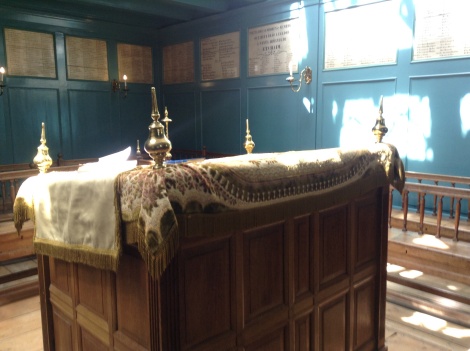 Today, the community uses what was the yeshiba’s study hall as their winter and Shabbat afternoon synagogue. Seeing the library, I am reminded of the essential role that Talmud Torah plays in creating viable and lasting Jewish communities.