There is a magical feeling in Curacao’s Mikve Israel synagogue (‘Snoa’).  Constructed in 1732, it is the oldest surviving synagogue in the Americas. It is gorgeous. With its sand floors and white-washed walls it is most assuredly Caribbean. But it is also most definitely a Spanish & Portuguese synagogue, with its balcony, parohet-less hehal (curtain-less ark), rear situated tebah (reader’s desk), parnas banca (president’s bench), and inward facing seats. I felt at home. It seats 500 people, harking back to the 18th century when Curacao enjoyed the largest Jewish population in the Americas. 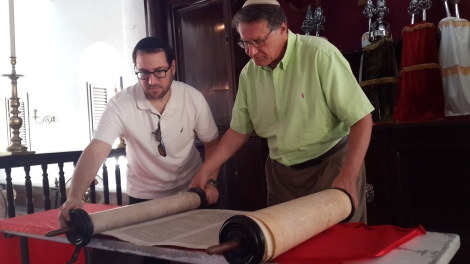 I was greeted by Avery Tracht, the congregation’s friendly cantor. Together we rolled the sefer for Yitro and affixed the traditional red backing cloth. It was a moving experience which reinforced the S&P origins of the synagogue. I say that, because while today Mikve Israel-Emanuel is a Reconstructionist congregation, it is fascinatingly also still decidedly Portuguese. The community retains many of its earlier customs and melodies, while having clearly also adapted or abandoned many of them over time.

In 1863 a large group of members broke away from Mikve Israel to form Temple Emanuel, a nineteenth century reform style synagogue. Over time, both congregations struggled to survive, and by 1963 they decided to reconcile. To do so Temple Emanuel agreed to accept the reintroduction of many synagogue rituals, while Mikve Israel accepted mixed pews, emendations to the prayer book and other non-orthodox practices. Emanuel moved out of their building and back into the beautiful Snoa. Now one congregation, they’ve found a way to create a hybrid that seems to work for them.

Me and Michael de Sola

I was pleased to have the opportunity to deliver a lecture and visual presentation to the community about the roots of the Western Sephardim as well as their divergent developments under Dutch and British rule. I also met with their capable parnas Michael de Sola. I shared with him about how London has successfully preserved so many of the features of an S&P community, including multiple synagogues, a Bet Din, and a Kashrut authority. While Bevis Marks retains a deeply abiding adherence to the Western Sephardic ‘minhag’ and Orthodoxy, it shares many of the same demographic challenges and opportunities as its sister congregation in Curacao. We each shared about what’s worked for us and learned some useful ideas from one another. Thousands of Jewish cruise shippers visit the Snoa each year, as well as others seeking a beautiful site for a Jewish destination wedding or Bar/Bat Mizvah! Some people have even chosen to winter in Curacao. The community hopes that these trends enable the congregation to continue for many years into the future.

I thoroughly enjoyed my visit to the Snoa. (Click here to learn about Curacao’s historic Jewish cemeteries). It is more of a synagogue compound than just a synagogue alone. There I could imagine the former hustle and bustle of this historically vibrant and prosperous Jewish community, just a couple of streets away from the harbour. At Mikve Israel-Emanuel you can see the former mikve (ritual bath), the former rabbi’s house/museum, and the community building/gift shop. The museum displays many historic ritual items, some of which the community still uses, such as their stunning 1716 hanukkiah. I was particularly moved by the words emblazoned (in Hebrew) above the archway into and out of the synagogue courtyard, “Blessed may you be in your entrance” and “Blessed may you be in your departure.” Amen.

The most important work on this subject is now out of print and is very expensive. If someone would like to buy me a gift, here is the link :).