The practice of newborn male circumcision is synonymous with Jews and Judaism. The Torah records that the commandment of this procedure was first directed at Abraham and his family. Since that time the descendants of Abraham have continued to perform the mitzvah of berit milah with unyielding vigor, defying all attempts to blot it out by the empires of old or its opponents today. 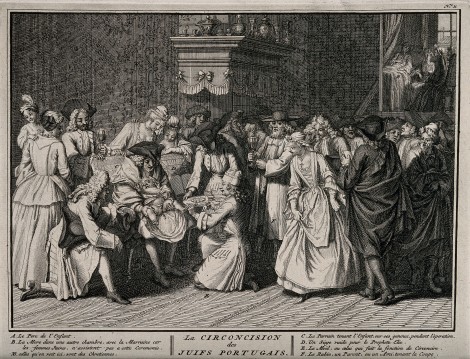 The meaning of the practice however is obscure. First given to Abraham it was a symbolic act testifying to God’s covenant with him. The location of the sign may symbolize the eternality of the covenant, that it would remain in force throughout the generations.

According to the Talmud circumcision symbolizes man’s responsibility to perfect humanity and the world. The act of circumcision indicates that man was not created perfect, but that it was left to us to bring that about. God intentionally left man imperfect to teach him this invaluable lesson – that man should not just accept his surrounding and lot, but work to improve the life of others and the world around him.

For Portuguese Jews, circumcision took on an additional meaning. Living under the guise of Catholicism following their forced conversion in 1497, circumcision was obviously outlawed. It was clearly impossible to perform lest they provide the Inquisition with indisputable evidence of their clandestine faith. However, those who eventually made their way out of Iberia found within the practice of circumcision a form of self-sacrifice to God, indicating their unyielding adherence to Judaism and Jewish tradition.

The 1720s witnessed a flood of conversos into London, as they fled the increased activity of the Portuguese Inquisition. A treaty between England and Portugal meant that Portuguese officials could not board British vessels even if docked in Lisbon. The leaders of Bevis Marks Synagogue capitalized on this reality to pay British ship captains to smuggle their ‘cousins’ to the safer harbors of England. The circumcision records of Bevis Marks record that thousands of Portuguese conversos arrived over a period of twenty years. Circumcisions were performed on hundreds of individuals, including elderly men in their 80s and all other ages. For these returnees this act confirmed their commitment to return to the heritage of their ancestors and to begin a process of reeducation and return.

The Spanish & Portuguese Jews conducted the first major ‘kiruv’ movement in Jewish history, with the publication of hundreds of books on Judaism and Jewish law, as well as translations of the Bible and prayer book, all in Spanish or Portuguese. The story of their valiant and unlikely mass return inspires me daily, and I believe anyone else interested in learning more about the eternal heritage of the Jewish people.