I used to think of the significance of Torah portion of Ki Tisa as being about the sin of the Golden Calf, and of how the people turned away from G-d. However, after years of contemplating the Spanish and Portuguese Jews, I now think about it differently. Is Ki Tisa not actually about human fear and frailty, and most importantly also about return and redemption? All people sin and stray, and so the real novelty and enduring legacy of the story is that a person can still ‘make it right’ after the fact.

Like the Jews of the desert, many of the Jews of Spain and Portugal turned to what they  considered idolatry, Catholic worship. It was a calamity of such proportions that it was surely seen as a rupture no less significant than the worship of the Golden Calf. No doubt, had Moses been alive he would have smashed the tablets once more.

There is a major debate amongst scholars and rabbinic sages concerning how to frame the Spanish and Portuguese apostasy. Some have seen it as a repudiation of Judaism, and therefore considered them to be sinners of the worst kind (see Baer and Netanyahu). Others, however, understood that they apostacized under duress, and therefore didn’t consider them liable (See Roth and Yerushalmi). In fact, so many of the conversos retained an adherence to their Jewish origins, whether through a degree of secret Jewish practice or in identity alone, that it is an indication that for many their apostasy was never ‘complete.’  Indeed, thousands upon thousands ultimately returned to open Judaism in the Western Sephardic diaspora. That surely is a testament to the ability of even the most wayward to return to their roots and to be welcome back into the Jewish fold. 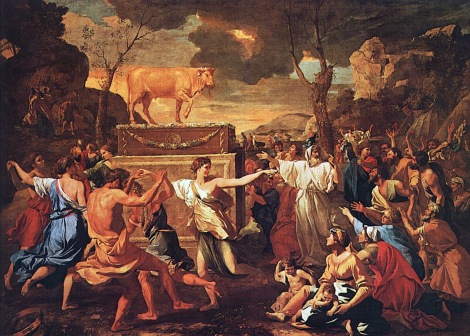 The text of the Torah is ambiguous with regards to the motivation of those who went astray. The verse states (Exodus 32:1) ‘When the people saw that Moses was late in coming down from the mountain, the people gathered upon Aaron, and they said to him: “Arise! Make us gods that will go before us, because this man Moses, who brought us up from the land of Egypt we don’t know what has become of him.” Commentaries debate whether they set up the Golden Calf as an idol (Shemot Rabbah 42:6), or as a replacement for their leader Moses, believing that they needed an intermediary to communicate with G-d (Kuzari 1:97). Either way, both objectives are considered idolatrous and therefore regardless of which rationale they embraced, they were punished. Still, perhaps the ambiguity itself indicates that there were differing rationales amongst the sinners. It is interesting then that regardless of how each person understood the Calf’s purpose, they found common ground in the physical construction of it, and therefore worked in unison to build it.

No doubt, differing objectives, justifications, and ultimate hopes also existed amongst the conversos. Perhaps illustrative of this point, is that even amongst those that did return, there was not surprisingly a spectrum of commitment and adherence to their newly rediscovered ancestral faith (See Bodian). Therefore, just as in the case of the Golden Calf, some conversos were ultimately lost to the Jewish Nation, whilst others found their way back.

The sin of the Golden Calf demonstrates that people sin for different reasons, at times rebelliously, while at other times our of desperation or peer pressure. The story most importantly though, also demonstrates that there is always room for return amongst those that do so with sincerity and commitment. The Golden Calf then, is not just a story of sin, but also a story concerning the complexity of the human condition, and a story reaffirming G-d’s enduring love. It is a story of challenge and then redemption, a story that the Spanish & Portuguese Jews knew so well.