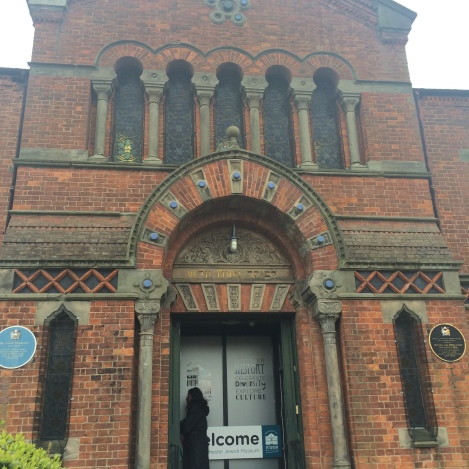 Manchester is one of the most recent cities to establish a Spanish & Portuguese community. Theirs was inaugurated in 1874 along Cheetham Hill Road in North Manchester. Jews first arrived in Manchester in the late 1700s, and an Ashkenazi synagogue was established in the nineteenth century. However, it wasn’t until the end of the nineteenth century that there were sufficient Sephardic families to create their own community. Whilst some of the founders came from London, many came from other Mediterranean Sephardic communities and from the East. That ethnically diverse heritage is reflected in the oriental features of their S&P synagogue. 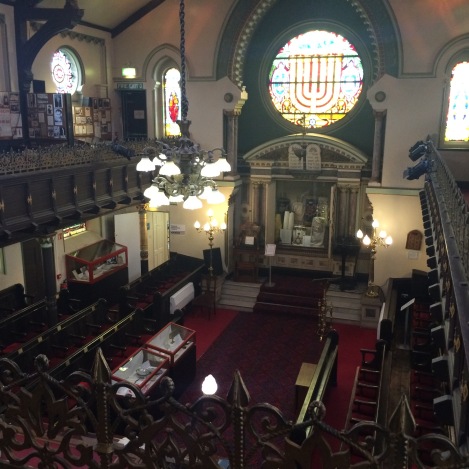 As Jews relocated to other parts of Manchester, the community decided in 1984 to rededicate the synagogue to the establishment of a Manchester Jewish history museum. The museum is now in the process of restoring elements of the synagogue to their original condition, though I also found it beautiful in its authentic used state. In addition, the museum displays many interesting photographs and Judaica items.

The community reestablished itself further north in what is today a thriving Jewish area. They converted a home on Moor Lane into their new synagogue. They brought to it their original tebah and WWI memorial plaque, ensuring a lasting link between their earlier and new home.

Today, the community consists of Sephardic Jews from the East and from Gibraltar, as well as some from the original community. The prayer melodies therefore now reflect a variety of traditions. I am grateful to one of its devoted members, Antony Hodari, who took the time to share the current and previous synagogue with me. The experience reinforced my belief that increased collaboration between historic and current S&P synagogues can help to strengthen one another.

Antony Hodari in his boyhood seat at Cheetham Road S&P