As an American living in England, I’m often asked about Donald Trump. Now as a resident of England, my American friends ask me about Brexit. From the lack of city workers in the London coffee shops midday on Friday, but from the very large crowds drinking outside the pubs, I’d say a lot of people in Britain are in shock. Uncertainty concerning the future roils markets, and seemingly even some of those who voted ‘leave’ are somewhat surprised, and are waiting to see how Brexit will ultimately play out.

I don’t do politics, nor was I eligible to vote (who says you can’t have taxation without representation?), and I don’t know what is ultimately in Britain’s best interest. However, it seems to me that many of the votes for Brexit and for Trump (not that they are the same in all ways), speak more to some people’s dissatisfaction with the present than to specific visions of the future, as both Brexit and Trump remain unknowns in terms of practical policy. However, the vote demonstrated that a lot of people clearly want change, even though they don’t know what that change will ultimately look like. I think that makes the reality of this vote that much more telling as people usually stick with what they know rather than go with something that they don’t. 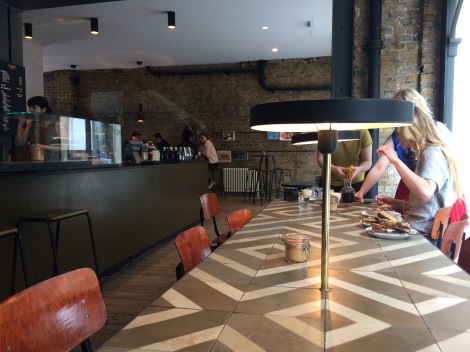 Association Coffee on Creechurch Lane, opposite where the first S&P synagogue stood in 1657 until Bevis was built in 1701

Bevis Marks is oldest synagogue in Great Britain, in continuous operation for over three centuries. From that vantage point I believe we can draw some perspective on Brexit from the Torah and our traditions. One of the most visually distinct customs (minhagim) in the Spanish & Portuguese tradition, one which is familiar to anyone who has ever prayed in a S&P synagogue on a Shabbat, is the processional to return the Torah to the hehal (ark). We escort the Torah. We walk slowly and steadily with purpose. Indeed, we even appoint a person each week whose primary responsibility is to escort the Torah, the Acompanhador, the one who accompanies. What is its purpose of this companion? Where does this practice originate?

The Torah states that the Jews too had an escort throughout their wanderings. Wherever they walked, G-d’s Cloud of Glory was with them. According to the Midrash it protected the people, removing anything harmful from their path. However, it had another important purpose, one which is explicit in the Torah. “And upon the cloud’s departure from over the Tent, and afterwards, the children of Israel would travel, and in the place where the cloud settled, there the children of Israel would encamp (Numbers 9:17).” The cloud led the people. They may have wandered, but G-d was always with them. While the people did not know what the future would bring, or where they were to go, the ‘Anan, G-d’s presence, still provided a path.

When we escort the Torah, we aren’t only giving honour to the Torah, protecting it as it were. What we are also saying is that we will follow the Torah into the unknown. That we will let the Torah lead.

Bevis Marks and the London S&P Sephardi community have lived through countless commonwealths, Kings and Queens, as well as survived revolutions, world wars and terrorist bombings. This has made Bevis Marks the longest continuously running synagogue in the world. While we may never know what the future will bring, we do know that we will remain steady as long as we walk down that path with the Torah. This synagogue and its traditions are our anchor. Indeed, at times of uncertainty, we walk that path whilst even more closely clinging to the Torah and our traditions. I am no politician, nor am I a prophet, but I know that if we follow the lead of our ancestors, those who escorted and followed the Torah in this synagogue for over 300 years, we will persist and we will prevail, wherever the future may take us.

2 responses to “Beha’alotekha – Bevis and Brexit”