Tiny and hidden away is the second cemetery of New York’s first Jewish congregation, Shearith Israel. Located in Greenwich Village on West 11th st., it was in use from 1805-1829. This was a period of American expansion, both in the west and in the cities of the east. At first it was used to bury community ‘outsiders,’ but in 1823 it became the congregation’s primary cemetery.

In that year, burial was banned in its earlier burial ground, Chatham Square Cemetery. That first cemetery was now located within New York’s growing urban footprint. The colonial era of Jewish lower Manhattan had concluded. The city continued to grow throughout he 19th century, and Shearith Israel constructed synagogue after synagogue in an ongoing creep uptown (Second Mill St, Crosby St, 19th St, and finally 70th street in 1897). 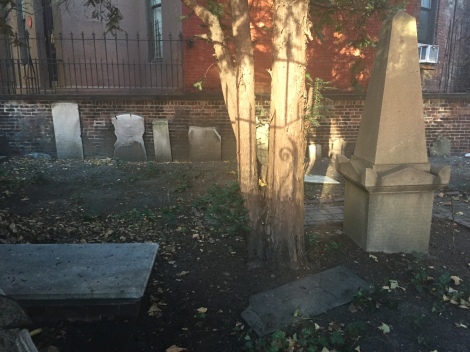 The cemetery used to cover a larger piece of land, but it was cut into when the city laid out its now renowned grid in 1811. While it took time for the Commissioner’ Plan to be implemented, some 11th Street remains ultimately needed to be reinterred into another plot. The resulting remaining 11th Street cemetery is therefore an oddly shaped triangle. 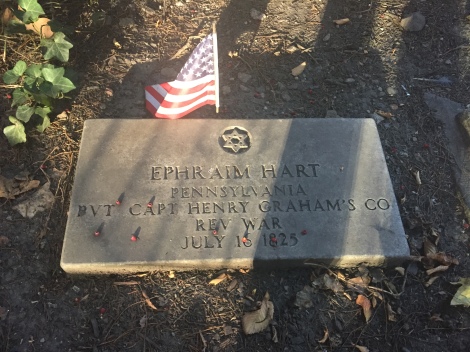 I visited the burial ground during a trip to New York last year, though I am only writing about it now. The cemetery still contains a few notable headstones. This includes that of Ephraim Hart who participated in the American Revolution. Another stone recalls Isaac Harby, an important, though some would say infamous, figure. Harby led a charge in 1825 to introduce Reform into Charleston’s Spanish & Portuguese Synagogue, Beth Elohim. When the push failed he led a break away group that started the first Reform congregation in America. After that congregation failed (though the movement would later reemerge in Beth Elohim itself), he moved to New York. Shortly thereafter he passed on from this world.

Shearith Israel is now engaging in a project to restore these badly dilapidated grounds. Those wishing to support their efforts can find more information here. While the cemetery is modest in size, it represents an important moment in the changing landscape of New York City and American Jewry. 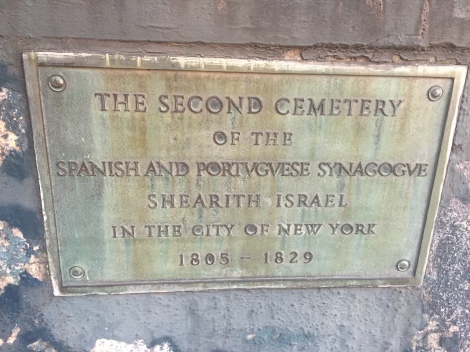