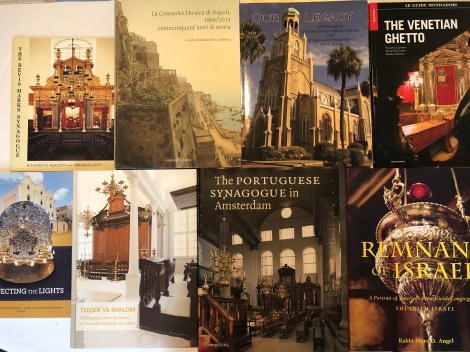 Over the past ten years I’ve visited about fifty sites relating to the history of the S&P. These include historic and living synagogues, cemeteries, schools, and locations in Spain and Portugal. To most people many of these cities probably don’t mean much, or evoke other associations, but to me they mean the Western Sephardim. I’m often asked why I spend my free time visiting these places, or reading about them. This parashah is my answer.

In this week’s parashah Moshe recounts the places that the Jews travelled through on their way from Egypt to the Holy Land (Deuteronomy 1:1-2). It is a helpful review, but its purpose is unclear. Why do we need a list of locations that we already know? The Midrash therefore explains that Moshe wasn’t simply repeating where the people had camped, but was intimating what had transpired in those places, in order to offer rebuke for their past misdeeds (Sifrei 1).

What’s interesting about this explanation is that those events predated Moshe’s audience. This final speech was given to the Children of Israel who were to enter the Land of Israel. Most of the generation of the Exodus had died out during their forty year sojourn, and so for the descendants these places were just stories. In other words, Moshe was not really rebuking Israel, he was warning them to not repeat the mistakes of those who had come before them.

Remembering what came before us is more than history, it forms part of our identity. We learn of our ancestors’ triumphs, as well as their travails. We are inspired by their accomplishments, and we learn from their mistakes – but only if we know what occurred.

When I reflect upon places where the Sephardim have lived, struggled, and survived, I am stirred. I hear Cordoba, and I think of Maimonides. I hear Seville, and I think of the 1391 uprising against Spanish Jewry; Madrid and the 1481 Inquisition; Granada and the 1492 Expulsion. When I hear Portugal I think about all of the Exiles who escaped to that country only to be forcibly converted in 1497, but to somehow maintain their Jewish identities for centuries. I think of Amsterdam, and I imagine thousands praying in the great Portuguese synagogue and studying in the famed Yeshiba Etz Haim; the islands of the Caribbean, and that Sephardim succeeded in planting new Jewish life wherever they went; London and New York, and how the Spanish & Portuguese Jews established some of today’s most important Jewish communities.

The story of the Western Sephardim is one of struggle, survival and success. I make the effort to visit places associated with them because I want to know their stories, and to be inspired by them. Indeed, you can’t understand the S&P and our community today, without knowing the heroics of the generations who came before us. These stories are part of our communal identity, and we have an obligation to know them and to share them with our children – something I aim to do with the children of our Sunday morning Sha’are Tikva classes.

This is a particularly fitting message on the Shabbat before Tisha B’Av. We are in the time period of mourning over the destruction of the Temple in Jerusalem, an event from nearly two thousand years ago. At times it is a difficult event to relate to, and one might argue that commemorating it is therefore no longer meaningful. However, such an argument would completely miss the point.

We are specifically mourning during these weeks in order that we remember. We mourn in increasing severity from the Three Weeks, to the week of Tisha B’Ab, to Tisha B’Ab itself, much in the opposite way we decrease in mourning after the loss of a loved one from Shiba, to Sheloshim, to the year. During this time of year we are ramping up our mourning, to help us feel what we have lost. We need to remember that we had a national identity, that we had a homeland, and that we we had a place to commune with G-d. On Tisha B’ab we remind ourself that Judaism is more than a religion, it is a nationality.

According to the Midrash the Torah stresses that Moshe spoke ‘to all the children of Israel,’ so that none of them could later counter that if they were present, they would have spoken up against Moshe’s rebuke. By that same vein, we have a duty to make sure our community, and our children, know our stories, so that they will never need to claim that they would have remained engaged if only they had known them. We, the Spanish & Portuguese Jews, are the proud recipients of perhaps the greatest story of communal survival and rebirth in Jewish history. Let us recount these stories to ourselves, and to all of Israel, so that we can all be inspired by them together.

2 responses to “Debarim – Traveling the S&P”