The Spanish & Portuguese congregation of Holland Park, London built their beautiful synagogue in 1928. I had the pleasure of celebrating its 90th anniversary on 10 March 2019. Despite my having moved to London over three years ago, it was my first occasion visiting the synagogue, and it did not disappoint! It is a wonderful building, architecturally similar to London’s S&P Lauderdale Road synagogue. Its intimate space creates a warm environment, a sensation which is further reinforced by its gracious community. I was warmly welcomed by everyone I met.

The community’s president, Leon Benardout, delivered the opening address in which he shared the history of the synagogue building, but more importantly, of the community in general. It was founded in 1918 by Ottoman Jews of Istanbul and Salonica. They began to arrive in London in the 1890s, though first settled in the East End around Bevis Marks Synagogue. These Ottoman Jews then slowly drifted to West London with its local trade in oriental rugs, particularly at the time of Franco-British Exhibition of 1908 which brought with it further immigration from the east. The newcomers worked together with the London S&P to purchase the land for the synagogue and with Sir Sassoon David, Baronet to fund the building’s construction. As a result, the community is officially called ‘KK Sha’ar Hashamayim (the official name of the London S&P) Kinneset Sassoon David.’

Holland Park Synagogue is formally an independent congregation, though it remains an affiliate synagogue of the S&P Sephardi Community with close ties. In the words of Rabbi Joseph Dweck, they are ‘part of the family.’ In his remarks, Rabbi Dweck encouraged all of London’s Sephardim to work together to preserve a Judaism that warmly welcomes Jews and raises them up to the Torah with kindness. London’s abundance of S&P synagogues, coupled with an S&P Bet Din and Kashrut Authority, is an unparalleled phenomenon amongst the world’s remaining Western Sephardic communities.

The rite of the Holland Park community is Western Sephardic, yet it is supplemented with prayers specific to the Ottoman Jews, including some songs in Ladino. As part of the celebration service attendees were treated to a Ladino rendition of ‘mipi ‘el’ led by Mr Maurice Martin, current choirmaster at Bevis Marks Synagogue, but formerly of Holland Park Synagogue in the 1960s and 70s. It was a pleasure as always to see him in his element!

With the mass destruction of Ladino speaking Jewry in the Holocaust, there are sadly few other places today where these Ladino songs can still be heard.

For the past twenty years the congregation has been led by Rabbi Abraham Lavi. Otherwise, the name most associated with the synagogue’s early history is Reverend Nassim I. Levy who ministered there for over 50 years from its founding in 1918 to 1972! Unfortunately, over the years, as often happens, people moved to new areas, and the community shrunk in size. Thankfully, though, recent immigration of young French Sephardim to West London and the opening of a nursery on the premises has infused the community with new energy and hope for a bright future. With the love and commitment I saw amongst the synagogue’s members for their community, please G-d they will succeed. 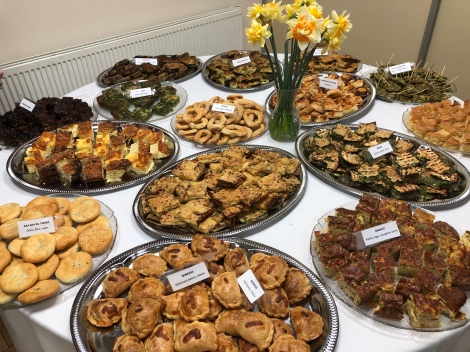 A final highlight of the occasion were the treats served at its conclusion. Traditional Ottoman Jewish foods were prepared by members of the community, together with a small pamphlet about them. Savoury and sweet, they were a reminder of the origins of the community, and how east and west came together to create the special S&P community of Holland Park Synagogue.