Before even starting my first day at Shearith Israel, I set out to connect with its past, in August of 2009.  And that I did with an excursion up the Hudson to check out the Gomez Mill House, the oldest Jewish dwelling in Colonial America, built in 1714 as a trading post by Luis Moses Gomez.  Gomez was Shearith Israel’s Parnas (president) when the congregation built its first synagogue building, the Mill St. Synagogue, in 1730.  Amazingly, his descendant, David Nathan, is the current Parnas, whose children are 10th generation Manhattanites!

Gomez was a Converso returnee, having fled the inquisition and returned to open Judaism.  There is a tradition that he escaped via France, and as a gesture of appreciation to King Louis XIV, he adopted the name Luis.

At the Gomez Mill House, Gomez traded for furs with the local native peoples.  Over the centuries, others have owned the property and called it home.  Additional rooms and a second floor have been added, but one can still clearly see the  stone walls from the original one-story structure.

Inside there are artifacts from the descendants of the Gomez family, who, as part of the Gomez Foundation for Mill House, repurchased the home in 1984 and established it as a public museum.

The visit helped me to appreciate that when we build strong foundations, things tend to last.  Gomez knew this well, as can be seen in his trading post and in his legacy at Shearith Israel. 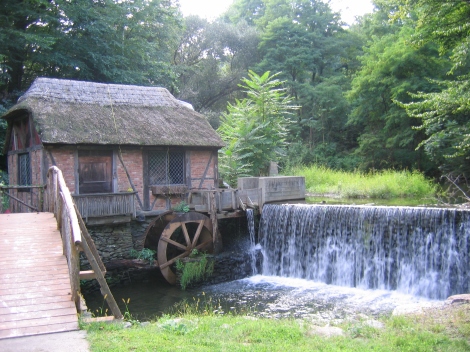 One response to “Gomez Mill House”