To pray and teach at the Esnoga was extraordinary. The Esnoga and Portuguese Jewish community of Amsterdam are the things of lore. Ever since I began serving at Shearith Israel, I’ve always wanted to pray there, at the ‘Mother Community.’ Amsterdam is where the ‘Portuguese’ Jewish diaspora began when thousands of conversos made their way there and back to Judaism in the 1600s and 1700s. From Amsterdam, other Portuguese congregations sprang up in Western Europe’s port cities, as well as in South, Central and North America.

Following the merging of three Amsterdam Portuguese Jewish Congregations in the 1630s, the unified Talmud Torah congregation was formed. In 1675 they completed their famous synagogue, known as the Esnoga. It is modeled after a contemporary rendering of the Jerusalem Temple, and it was a towering testament to the freedom and success which the Portuguese a Jews enjoyed in Golden Age Amsterdam. Over the centuries the community has been led by great Torah scholars and is world renowned.

Following WWII the community struggled to maintain the Esnoga, and therefore recently transferred maintenance of the building to the Jewish museum, which makes it possible for public funds to be used in its upkeep. This has allowed the community to focus on more important matters like education and welcoming newcomers. The congregation also operates a second minyan in the Amsterdam suburbs, where most of the Jewish community now lives.

I had the pleasure of meeting with the energetic community chairman, Bram Palache (yes, descendant of the ‘pirate rabbi’) to discuss the challenges and opportunities of the congregation. The community has enjoyed a recent upswing in participation, including several young men who have devoted themselves to learning the minhag and leading the services. They are taught by Nachshon Rodrigues Pereira, Hazzan, who has made restoring the community one of his life missions. 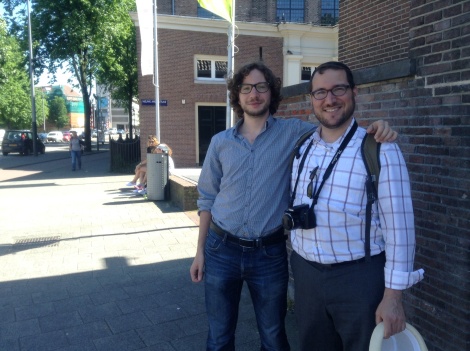 I was warmly welcomed on Shabbat by all of the community members and was made to feel as part of the community. I taught Shabbat afternoon, at seudah shelishit and following Sunday morning minyan. In the afternoon lecture I spoke of the historical connection of New York’s Portuguese community to the Amsterdam community, including the ways in which it was modeled after Talmud Torah, but also diverged from it (like by including Ashkenazim in its ranks).

I look forward to strengthening the historical ties between our communities, wherein we can once again enjoy the bonds of ‘The Portuguese Nation.’