You’ve never seen a synagogue like this! Constructed in 1878, Mickve Israel is the only neo-Gothic style synagogue building in America.  It is similar to many other religious buildings in Savannah, though Mickve Israel was a Spanish and Portuguese Jewish community. 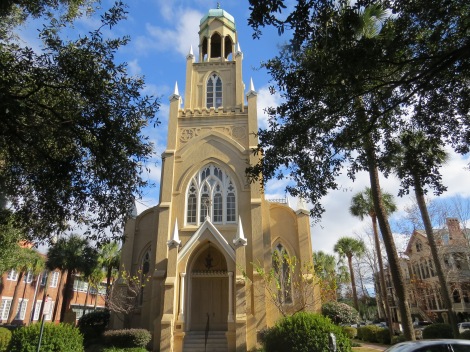 When built, Mickve Israel had already adopted many reform practices, and so this synagogue building always included an organ and was structured for mixed pews. However, they did not officially adopt the official Reform prayer book until 1902, and therefore still retain some of their original Spanish and Portuguese traditions.  These include singing El Nora ‘Alila at Ne’ila, and calling of their president ‘parnas.’

The founding story of the congregation is particularly fascinating. The city of Savannah was established by the British in 1733 to act as a buffer zone between Spanish held Florida and the British port city of Charleston. Jews joined the settlement within months of its inception and were welcomed by its founder James Edward Oglethorpe.

Statue of James Oglethorpe in Savannah

Among the founding Jews were 8 Ashkenazim (the Sheftall and Minis clans) and 33 Portuguese Jews, recent refugees from the Portuguese Inquisition in Portugal.  As newcomers to the London Jewish community they likely new little about open Jewish practice. Savannah would give them an opportunity to strike out on a new future.  Bevis Marks Synagogue paid for their passage and gave them what is now a five hundred year old Torah (written on deer skin) to help them begin anew. Illustrative of their recent Catholicism is that during a conflagration with the Spanish in 1741, the War of Jenkins’ Ear, these recent returnees to Judaism felt compelled to flee Savannah. They did so out of fear that they’d be captured and turned over to the Spanish Inquisition!

Ultimately, the community grew and was sizable enough to build its first synagogue building in 1820. It was rebuilt in 1841 following a fire and consecrated by Isaac Leeser. The current building was constructed when they outgrew that space. While no longer a ‘Spanish and Portuguese’ congregation, Mickve Israel is extremely proud of its heritage, and displays many of its artifacts in a small museum on the premises. These include their original circumcision set and their minute book from 1790. I’m truly grateful to congregant Phoebe Kerness and Executive Director Ken Chanin for their warm welcome and for taking the time to show me their synagogue.

Beautiful Savannah with its Many Live Oaks and Spanish Moss!