In 1751 a bell was cast. The work was carried out by the firm Lester and Pack, today named Whitechapel Bell Foundry, located just a few blocks away from London’s Bevis Marks Synagogue. The bell was ordered by the Assembly of the British colony of Pennsylvania for their soon to be completed bell tower. They instructed that there be inscribed upon the bell ‘Proclaim Liberty throughout all the land unto all the inhabitants thereof.’

Liberty Bell in Philadelphia, Circa 2008

These words are taken from this week’s parashah. The Torah declared that every fifty years (yovel) all Jewish slaves shall be set free. However, the language of freedom ensured through yovel is unique. The Torah uses the uncommon word deror, not the usual hofshi or herut, to declare this freedom. How is deror different?

The answer lies in the world’s most famous Biblical misquote. The actor Charlton Heston, playing Moses in the film ‘The Ten Commandments,’ demanded of Pharoah ‘Let My People Go.’ In truth, in the Torah Moshe demanded on behalf of God ‘Shelah et ami ve’yaabduni,’ ‘Let My People Go that they shall serve Me.’ The objective of the Exodus was not the freedom from bondage, but the freedom to fulfill a higher purpose. (This idea also relates to the relationship between Pesah, Sefirat Ha’Omer and Shabuot, as we’ve previously seen)

Yovel was unique because all Jewish slaves were set free at once, even those who had previously opted to remain indentured. It removed the possibility of perpetual or hereditary servitude from Israel. The message was clear. Jews were already servants to another master, to God, and they could not be permitted to forget that. According to Nechama Leibowitz, this is the unique freedom of deror. More than freedom from slavery, it implies the more intrinsic freedom of the mind – the freedom or demand to fulfill a higher calling.

It is no surprise then that the ‘Liberty Bell’ eventually also became an icon for some of America’s colonial era Jewish congregations (Spanish & Portuguese Synagogues, of course) . It appears on the emblem of Philadelphia’s Mikveh Israel and is immortalized in the ‘Liberty Bell Bells (rimonim)’ that adorn the Torah of New York’s Shearith Israel. No notion is more Jewish than living a life of purpose. The bell represents an idea to which we aspire. We live with profound freedoms, and we are challenged to fulfill those freedoms with higher actions and behaviors. Perhaps theologically that is why the Liberty Bell is cracked, for we have yet to fulfill its deeper message. While a cracked bell emits no sound, if we realize its ideals it is our actions that will ‘Let Freedom Ring.’ 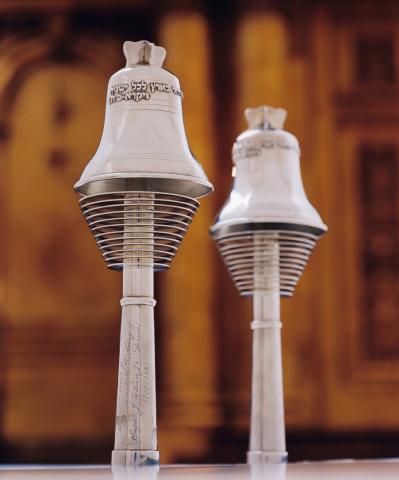