Upon visiting Portugal it isn’t generally apparent where significant moments transpired concerning Jews, unless someone shows them to you. That is mostly the case in Coimbra, too, where the Portuguese Inquisition operated (in addition to its courts in the cities of Lisbon and Evora). All of the trial records of the Inquisition remain, though they are now preserved in the capital city of Lisbon. Coimbra University, however, retains the procedural records of that city’s Inquisition. They are viewable to visitors upon request.

While the Inquisition officially ceased to function nearly two centuries ago, the sites of the Inquisition remain. Off of a public square named ‘Patio of the Inquisition’ are the remains of where victims of the inquisition were held. There, you can see the small cells. A metal ring on the ceiling is said to be the place from where a rope was hung for a particular method of torture. 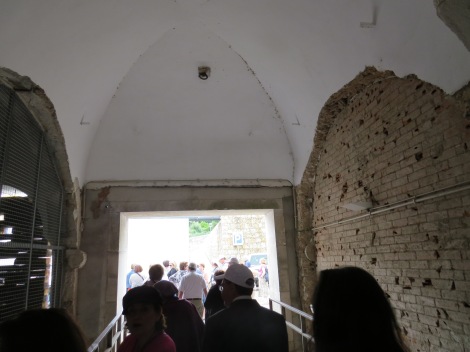 A few blocks away is the the Praça do Comércio, a long plaza with  Bartholomew Church at one end and Santiago Church at the other. It is the sight of the majority of Coimbra’s autos da fe, or acts of faith. At these ceremonies victims of the Inquisition were paraded around for all to see. They wore the sambanitos which indicated whether the accused had been penanced or whether they were to be burnt for their crimes. No sign marks the significance of this location. However, our group (June 2015) paused so I could recite the hashcaba, a memorial to those martyred there for their commitment to Judaism. 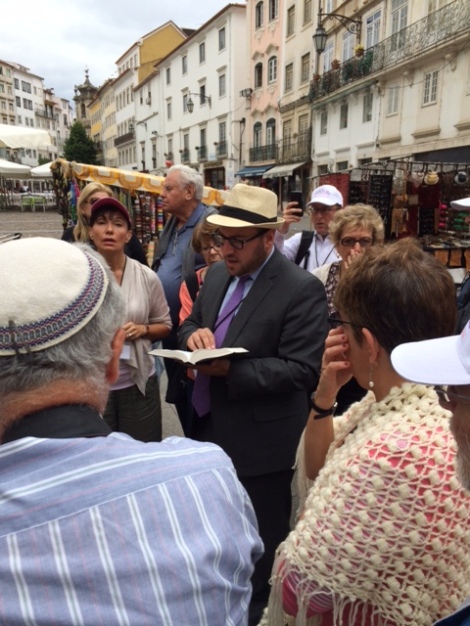 I am told that a mikve (ritual bath) was recently uncovered in Coimbra from the time when a Jewish community existed, though we did not visit it. We did, however, visit the city archives of Coimbra which are also held at historic Coimbra University. There we saw the earliest documentary evidence of Jewish presence in the city. Displayed is a rental agreement from the 15th century on which a Jew acted as a witness. Many New Christians ultimately served on the staff of university. In fact there was a time when so many professors were rounded up on charges of Judaizing, that the university was actually forced to temporally suspend instruction.

Similar to most of Portugal, in order to discover Coimbra’s Jewish history, one must search beneath the surface. Once there, an entire world appears.

For more on Jewish Coimbra   http://www.visitcentrodeportugal.com.pt/jewish-coimbra/