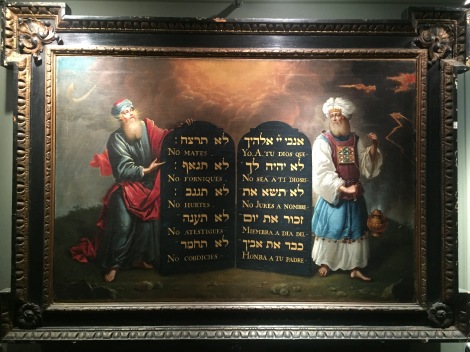 Surprisingly, the S&P custom is also to stand. It says in Rev Gaguine’s Keter Shem Tob (vol. 1, pg. 315): “It is the custom in London and Amsterdam that the entire congregation rises to their feet whilst the Torah reader reads the Ten Commandments.” How did this Sephardi S&P custom to stand came about?

The tradition to stand in the S&P may have evolved by accident, though this is pure conjecture (I welcome other theories in the comment section below). I’m informed that in Amsterdam the true minhag is actually to sit (See more here). However, if the Haham is given the aliyah, they stand out of respect for him, as they would do whenever he is called to the Torah. But, if no Haham is called up, they sit. However, as a rabbi is typically called up for that aliyah, it could be that it evolved in London, and in NY, to simply always stand. In other words, it had become so engrained to stand that even without a rabbi present they continued to do so.

The question of customs is important, because it distinguishes communities, not just in practice, but in concept too. Professor Haym Soloveitchik, identified a recent development in the Jewish world. In general, we have shifted from what he called a mimetic tradition to a textual one (see his article ‘Rupture and Reconstruction’). In other words, today, when most Jewish communities wish to determine proper practice, they open up Jewish texts and study them until they determine the most compelling position. However, mimetic communities, with their longstanding traditions, historically relied on precedent for rendering their decisions. They did so unless a tradition was discovered to be unfounded, in which case they would declare it a minhag taut, a mistaken custom, and discard it. Of course in most instances the custom had some rationale and so they would follow it, even if the textual sources indicated another approach more compelling.

While most communities used to be mimetic, the upheaval of the past 75 years, in both Ashkenaz and Sephardic communities, has undone tradition based communities, and forced our uprooted and then reconstituted communities to become text based. While the shift from traditions to texts is not bad per se, it of course means that something natural, or evolving has been lost. This is one of the qualities that makes the few remaining S&P synagogues so special. They remain some of the few communities in the world that can lay claim to authentic tradition and minhag hamakom. That does not mean that mistakes have not crept in over time, or that everything is perfect, but that fundamentally, they are mimetic communities, and that is compelling. There is something about their religious devotion that strikes us as natural, cohesive, and authentic, even if different than what is done in most other synagogues.

I and so many others are moved by ‘the minhag’ on a daily basis. I pray that the S&P will continue to stand the test of time!

4 responses to “Yitro -The Minhag to Stand or to Sit”