In terms of Portuguese Jewry Bayonne is somewhat of a misnomer. The Jewish community was actually based on the other side of the Adour River in what is called St Esprit (where Bayonne’s train station is now located). Furthermore, it wasn’t just one community. It functioned as a sort of Jewish center for numerous smaller outlying Jewish communities in the vicinity. Indeed, through the story of this community and its remarkable cemetery you can trace generations of Portuguese Jews in France. I had the great fortune to visit there during my recent journey along the historic Converso escape. 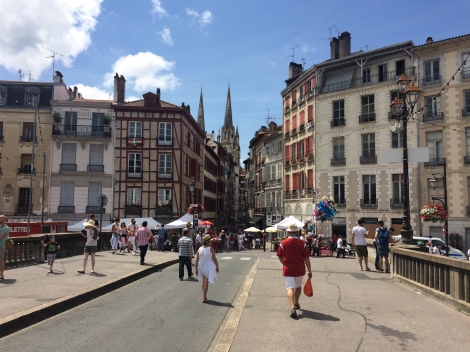 Bayonne is the capital of Southwest France’s Basque country. Portuguese Conversos began to arrive there in the mid 1500s, though were only permitted to live publicly Jewish lives at the turn of the eighteenth century, when they formed Congregation Nefuzot Yehuda (The Scattered of Judah). It is from around that time that they also began to conduct Jewish burials and opened a Jewish cemetery. Since then all of their burials have occurred in one cemetery. It is an incredible sight and was probably the Jewish highlight of my journey. I felt at times as if I was lost in a sea of history. As I looked out along the waves of stones, the further I gazed the further back in history I went.

The graves are packed incredibly tightly against each other leaving little room for any weeds to grow and obstruct their view. The stones themselves follow the date of death, so as you follow their path you walk along history. I was mesmerised by their rather crude and plain engravings, in contrast to the elaborate style more commonly seen in most other Western Sephardic cemeteries. There was something profoundly humble yet expansive and overwhelming about it.

The synagogue building was constructed in 1837.  At the moment it is being renovated to combat termites! Still, it is an impressive synagogue and speaks to the once strong and proud community that lived in Bayonne (thousands of Jews once lived there). In fact, Haham Raphael Meldola, grandfather of my early nineteenth century predecessor at Bevis Marks Synagogueby by the same name, served the Bayonne community in the 1730s.

I took  particular notice of a large and elaborate podium on the northern side of the synagogue. A similar structure is also present in the Portuguese Buffault synagogue in Paris. While it is a beautiful furnishing, and while it is also appropriate to not have the rabbi speak directly from in front of the hehal (ark), it is a quite unusual piece of synagogue architecture. You can imagine my surprise when I subsequently chanced upon the same style podium in Bayonne’s main Cathedral!

I was fortunate to arrive in Bayonne on a day when the town was celebrating a Basque festival. Everyone was dressed in red and white, and music played along the streets. It made for a rather fun atmosphere!

I was pleased to see that the local museums pay homage to the area’s earlier Jewish inhabitants. Bayonne’s wonderful Basque Museum makes note of the area’s Jewish presence and of their role in trade. At the moment though, most of their Jewish display is in storage to make room for their excellent exhibition ‘1660’ about the marriage between the King of France and the daughter of the King of Spain that brought peace to the region. The Chocolate Museum in the nearby seaside resort of Biarritz even attributes the art of French chocolate making to Portuguese Jews who brought that New World knowhow with them when they escaped to France!

The Bayonne synagogue is generally only used now on the High Holidays and on special occasions (or at least whilst they renovate). There is, however, a Chabad presence in an early twentieth century Ashkenazi synagogue in Biarritz. Thankfully, they maintain a small kosher shop which comes in handy for anyone retracing the historic escape route of Portuguese Jewry :).