As much as I love discovering the communities of the Western Sephardim, I’ve come to realise that sometimes travel isn’t enough – some things are only preserved in the pages of books. That is certainly the case with Livorno. It is located in Tuscany on Italy’s western coast, just to the south of Pisa. If you go to Livorno today you’ll have no idea that it was once one of the most important port cities in Europe. Economic decline and World War II bombings mean that today barely anything is left of this once great city.

Yet, in my various readings about the Western Sephardim, Livorno kept popping up. Sir Moses Montefiore was born there, and the rabbis David Nieto and the Hida each worked there for a time. Recurring references led me to read two recently published books about Jewish Livorno, one about its internal dynamics, and another about its international standing. I discovered that it was once home to one of the largest Sephardic communities in Western Europe, second only to Amsterdam! And so I decided that I needed to visit Livorno to see it for myself. 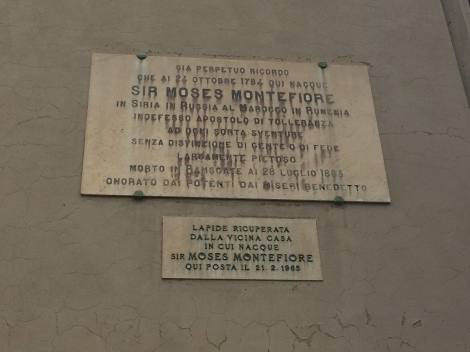 Livorno was a purpose built port city established by the Florentine Medicis in the sixteenth century. They set it up as a free port and invited various commercial groups to settle there. In 1593 Ferdinando I Medici promulgated an edict called the Livornina which laid out the parameters for Jewish settlement. It created an arrangement that was unique throughout Europe, wherein Jews were permitted/required to govern themselves, but they were not forced into a ghetto. In other words, the Jews of Livorno formed a separate corporate entity, though they were only separated bureaucratically, not spatially, from their neighbours. The Livornina’s framework fell somewhere between the Venetian (self-governing ghetto) and the English (no Jewish self-governance) models for Jewish settlement in the seventeenth century. Furthermore, Livorno’s Jews were only subject to a few professional restrictions, and they could erect a public synagogue.

Most importantly, the Livornina ensured the safety of Portuguese New Christians wishing to return to Judaism. They would be free from Inquisitorial activity and able to revert to Jewish life. Throughout the seventeenth century the Jewish community grew, reaching over four thousand Jews by the eighteenth century when they constituted nearly 15% of the city’s population. At that time in Europe, only Salonica’s Jews made up a larger proportion (over 50%) of their city’s population. Livorno’s Jews built their synagogue in 1603 and then remodelled it in 1695, when it became renowned throughout Europe. They redesigned its facade in 1905.

Livorno, on Italy’s western coast, was essentially created to compete with Venice’s port on Italy’s eastern coast. As European trade with the Ottomans declined and trade with the New World increased, so did Livorno’s trading position. It became the most important port in the Mediterranean, acting as a crossroads between cultures, religions, and goods. Livorno’s Jews played a central role in the coral and diamond markets, forging important trading partnerships in North Africa and London. 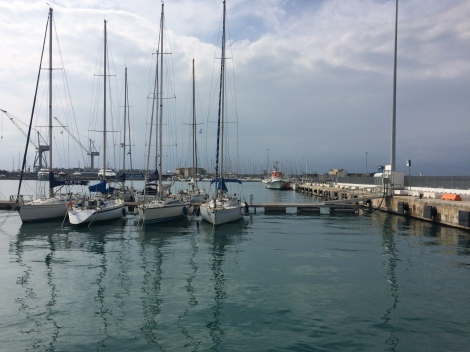 Over time, though, Livorno’s community trickled away. During the eighteenth century, Mediterranean trade began to decline and so did Livorno’s position. Furthermore, in 1848, with the first Italian War of Independence, Italian Jews were emancipated, and the Livornina was dissolved. Then, with Italy’s unification in 1861, Livorno lost its free port status. The result was that Livorno’s Jews began to leave for greener pastures. Finally, in World War II Livorno was occupied by the Nazis, and the allied armies bombarded the city’s port area. The historic synagogue was destroyed beyond repair. Neither of its pre-nineteenth century cemeteries remain.

I was filled with conflicting emotions as I visited Livorno, knowing what it once was, and seeing what it now is. The fort-like star layout of the city remains mostly the same, though most of the buildings today are recent, constructed in brutalist style. (Contrast this with Bordeaux, France – while its heyday is long gone, the splendour of the 18th century city remains). The new synagogue is architecturally distinct, far different from the classic S&P synagogues, but striking nonetheless. It is meant to look like a tent, reminiscent of the Divine Tabernacle which protected the Torah as the ancient Jews traveled through the desert on their way to the Holy Land. 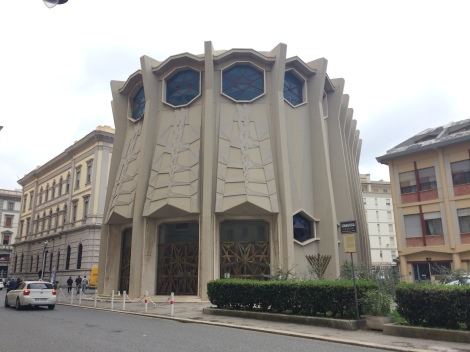 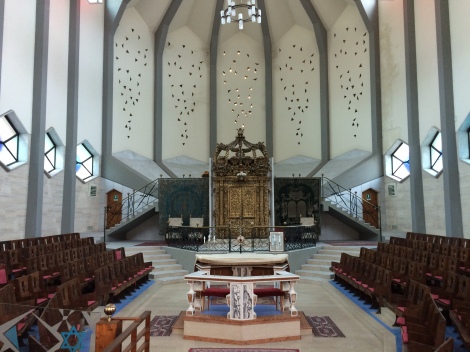 The only hint I got of the city’s once proud and prosperous history was at the Jewish community’s tiny history museum. It is housed in a former villa fifteen minutes away from the synagogue. The villa was once home to a yeshiva, and then it served as the community’s synagogue after WWII. It houses a historic Hehal (ark) which is said to have come to Livorno with Livorno’s first Jews. The museum displays several historic religious artefacts. In these items I was able to see the earlier splendour of Livorno’s kahal. I felt overwhelmed at the sight of the sumptuous fabrics, fine silver, and Torah pointers made out of coral. 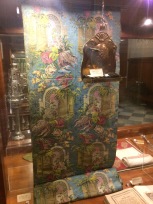 While Livorno may not be today what it once was, I’m glad that I was able to walk her streets, see her waters, and glimpse her past. I tried to imagine Livorno when she was a Portuguese metropolis. Her kahal was at the centre of the Western Sephardic world. May her merit and memory continue to sustain her community today.