When you think Pisa, you think one thing and only one thing. To my delight, I discovered that Pisa should also be known for something else, and that is its Portuguese Jewish heritage! In fact, you can even see the Leaning Tower complex from the grounds of the Jewish cemetery!

Pisa’s late medieval Italian Jewish community came to a close in 1571 when Cosimo I de Medici forced all of Tuscany’s Jews into a new ghetto in Florence. However, twenty years later, just as in Livorno, Ferdinand I de Medici invited Portuguese New Christians to settle and trade in Pisa, and to do so free from the activities of the Inquisition. The modest sephardic community of Pisa soon took hold, with its own synagogue, communal structure and cemetery.

I arranged my visit to Pisa based around the synagogue and cemetery opening hours, with a quick excursion to Livorno in between. The story of the synagogue, first established in 1647 (from a home synagogue built in 1595), reflects the story of modern Italian Jewry. The synagogue was built on the second floor of the building, so that passersby wouldn’t be able to see inside and for their curiosity to potentially lead to trouble for the community. Following Italian unification and Jewish emancipation in 1861, Jews felt greater confidence in their place in society. There were population movements across Italy, with Jews moving into what were then more prosperous areas, such as Pisa. Pisa’s Jews therefore renovated their synagogue at this point, just as the Jews in Florence built a new one. They also ‘modernised’ certain elements of the synagogue such as placing the reader’s desk (teba) towards the front, and rearranging the pews to face forward.

On my visit to their burial grounds I was able to ‘see’ the history of the community. The cemetery is located just outside the perimeter wall of the Leaning Tower/Cathedral complex. There are two distinct parts to it. The newest section, located immediately inside the cemetery’s entrance, dates from after Italian unification. It contains prominent stones in good condition.

Further back in the cemetery are older traditional Sephardic stones, flat or triangular across the ground. They are in complete disrepair, either crumbling or covered in overgrowth. It’s clear from the disparity that there was a break of sorts in the history of the community, a time of decline between the Early Modern and Modern Jewish presence in Pisa.

Remarkably, the archives of the community remain intact and are available for study in the synagogue. 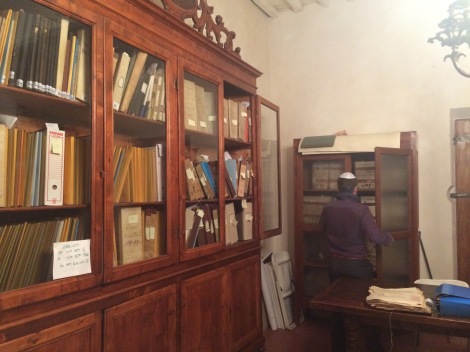 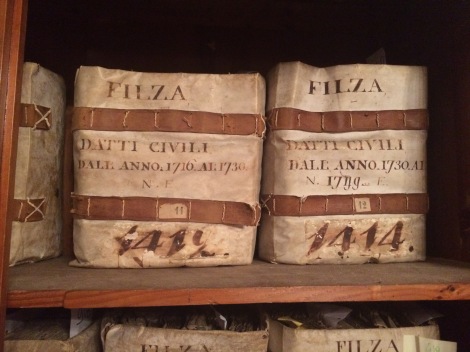 Visits to the synagogue are informal, but require advanced notice. I’m grateful to the staff for the generous time that they took to show me around the premises and to discuss the community’s history with me. Often without a minyan, they still gather each Shabbat. Perhaps in this way Pisa’s Western Sephardic Jewry are like the Tower – leaning, but refusing to fall!