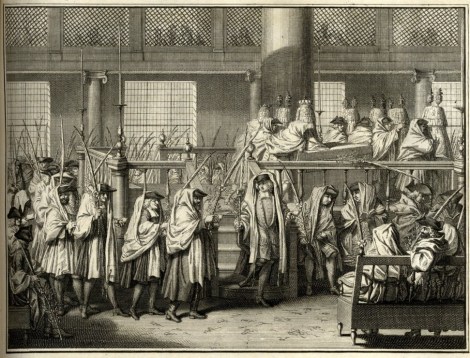 Once upon a time one of the most noticeable features of Western Sephardic worship was their distinctive talet, the prayer shawl worn by men during prayer. The S&P talet stood out both for its material and for the manner in which it was worn. These halakhically valid differences reflected the historical experience and religious values of the Spanish and Portuguese Jews.

According to the Torah, men may not wear a four-cornered garment unless tzitziot (special fringes) are tied to each corner. The tzitzit are meant to act as a visual reminder of the mitzvot, G-d’s commandments. The Torah though, does not explicitly tie this requirement to any particular garment (Numbers 15:38-40). Talmudic authorities debate whether all, or only some, materials require tzitzit, at least on a Biblical level. Accordingly, R’ Yosef Karo rules (SA O”H 9) that the Torah only requires wool or linen garments to possess tzitzit. Rabbi Moshe Isserles adds that according to other opinions, all other naturally occurring materials were also included in the Biblical requirement. (Rabbinic authorities require tzitzit for all four-cornered garments, regardless of their material).

Taken from ‘Jews of the Caribbean,’ ed. Jane Gerber

Traditionally, a common feature of the Western Sephardic talet was its distinctive blue stripes. Today most people associate blue stripes, as apposed to black stripes, with religious Zionism. However, the blue stripes of the Israeli flag were actually patterned after the blue stripes of the talet! The reason for the talet’s blue stripes was to commemorate the Biblical commandment to color tzitzi with ‘tehelet,’ a type of blue dye. According to the Talmud when a person gazed upon the blue, they were reminded of heaven. Over time the source of the blue dye was lost, and so the custom began to add blue stripes to the talet itself to recall the earlier observance. Some today believe that they’ve discovered the original blue dye, and so those that wear these tzitzit no longer adorn their talitot with blue stripes.

Historically, the S&P wore talitot made out of silk. This material is the natural byproduct of the silk worm. Silk is discussed in pre-modern Jewish sources, but it really came to dominate the Western Sephardic world. Many of these Jews were merchants who traded around the globe. No doubt they valued this material, and therefore chose to make their tallitot out of it. This then was their way of fulfilling the mitzvah with the greatest splendour and respect. Ze K-eli V’anvehu – This is my G-d, and I will glorify Him (Exodus 15:2).

Today, it is difficult to find a silk talet, and therefore it is increasingly absent in Western Sephardic synagogues. The most similar types of material to silk are rayon, a semi-synthetic fibre, and polyester, a synthetic fibre. Whilst their feel may evoke the original custom of the S&P, their synthetic nature make them undesirable for performing the mitzvah of tzitzit. In the absence of silk it is preferable to select a talet made of wool. 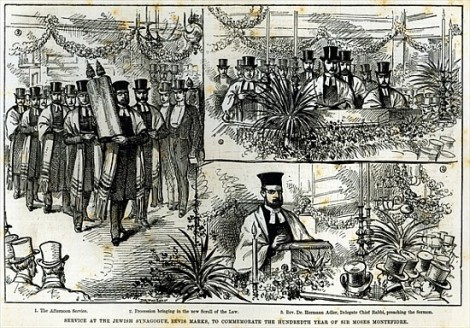 The S&P mode of wearing the talet may in fact be related to the use of silk. In contrast to the common practice of folding the extra material of the talet upon one’s shoulders, the Western Sephardim instead draped it around their arms with all four corners laying to the front of the wearer. The advantage of wearing the talet upon the shoulders is that the talet’s four corners then lie to the four sides of the wearer, remaining distinct. However, this manner of wearing is difficult with a talet made out of silk, as it easily slides off the shoulders! (In London the talet is also rarely placed over the head. Again, perhaps this is because slippery silk is not conducive to it, though some sources also suggest that covering the head with a talet is a form of haughtiness as it is a too public demonstration of ‘piety’).

There may be, however, an intentional reason for wearing the talet with all four corners forward. The blessing which is recited before donning the talet says that the mitzvah is for the wearer ‘to ‘enwrap’ themselves in the talet.’ The S&P way of wearing the talet is most certainly a more literal fulfilment of ‘wrapping.’

In addition, before reciting the shema, the tzitzit are gathered together whilst reciting the words in the preceding paragraph (the second Shema blessing) ‘Bring us together from the four corners of the earth,’ a reference to the ingathering of the exiles, and the unity of the Jewish people. The S&P custom to wear the four corners forward therefore makes it not only easier to gather the tzitziot together, it also reflects their faith in and commitment to the redemption. This belief was most strongly articulated by Amsterdam rabbi Manasseh ben Israel in his popular and influential seventeenth century work ‘Hope of Israel – Esperanza de Israel.’

Like with the talet, Torah observant Jews may not always perform the mitzvot in exactly the same way. Still, the talet reminds us that as long as we remain committed to Torah, and recognise that we just come from different corners of the same fabric, we will ensure the unity and ultimate salvation of the Jewish people.

The talet customs of Amsterdam differ somewhat from the usual S&P minhag. Aside for Simhat Torah they always wear wool talitot, and whilst they allow their talet to hang, the tzitzit don’t necessarily all fall forward. The 18th century Picart engravings seem to depict otherwise, so the current Amsterdam minhag may be a later (even if not a recent) change. See Rev. Gaguine’s Keter Shem Tob – http://www.hebrewbooks.org/pdfpager.aspx?req=14392&st=&pgnum=28)

See below for the unusual and somewhat problematic ‘scarf style’ of wearing the talet.