South Manchester will soon be home to the first Sephardic synagogue constructed in England in decades. I received a sneak peek at its construction when I went to Manchester before Pesah to speak for the organization Shema. Rabbi Amir Ellituv was kind enough to pick me up from the train station and show me around Jewish South Manchester prior to my speaking engagement. He then gave me a behind the scenes look at the soon to be completed synagogue. It is going to be a beautiful synagogue that will only help to further build a vibrant and young Sephardic community.

Plaque outside of Sha’are Rahamim on Queenstown Rd

South Manchester has been home to Sephardic Jews and a Western Sephardic community  since the earlier twentieth century (It is independent from the North Manchester Sephardic community). The  community, Shaare Rahamim, was established in Didsbury in 1904, before moving to their impressive synagogue in Withington on Queenstown Rd in 1927. At that time the area also saw the establishment of an Eastern Sephardic community, Shaare Zedek. The two communities merged under the name Shaare Hayim at the end of the century, and alternate between and combine the various Sephardic traditions and melodies. They’ve been led since the 1970s by Rabbi Shlomo Ellituv.

Since the 1970s more people moved out of didsbury and into outlying suburbs of south Manchester such as Hale Barns.They adopted the name Shaare Zedek, and also maintain both Sephardic rites. Their growth finally prompted the community to embark on the construction of a new synagogue. It is a light filled space, with beautiful symbolism. According to their Rabbi, Amir Ellituv, the community maintains an open atmosphere which welcomes Jews of all types to come together. The environment is one of openness, Torah, and inclusivity, and that is very much reflected in the synagogue architecture. I found that the space itself makes one feel as if they are taking in a breath of fresh air. 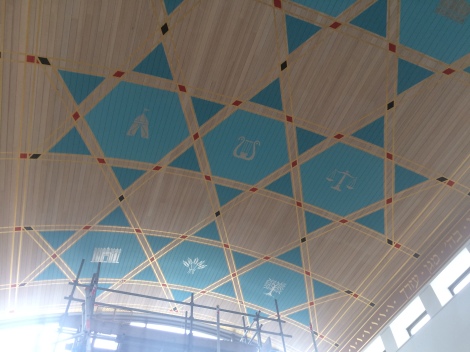 The synagogue includes spaces for youth activities, expandable synagogue seating, a hall for celebrations, and a park for outdoor activities, as well as a kitchen. It was exciting to see their growth and the future of Sephardic South Manchester. They are in good hands with their warm, easy going, and upbeat Rabbi Amir Ellituv.